At 7:30 p.m. on Thursday, November 10, 2016, I had the distinct pleasure of witnessing history in the making – I attended the preview night of the first ever Minnesota Opera production of Wagner’s Das Rheingold, the prologue in Wagner’s epic four-opera cycle Der Ring des Nibelungen (The Ring of the Nibelung). Prior to the final dress rehearsal that evening, I sat down with Brian Staufenbiel, the stage director for the production. Staufenbiel is the Creative Director at Opera Parallèle, a San Francisco-based opera company specializing in cutting-edge productions of contemporary works. 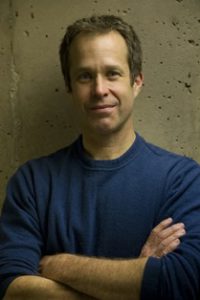 This is the first Minnesota Opera production Brian Staufenbiel has been a part of. While he was in town for last year’s production of The Shining, he was asked by Minnesota Opera if he would be interested in directing next year’s production of Das Rheingold, to which he emphatically answered, “Sure!” One of the first things Staufenbiel was confronted with was the fact that the pit at the Ordway Center for the Performing Arts is not large enough to house the 80+ member orchestra called for in Das Rheingold. “I thought that was an amazing challenge,” said Staufenbiel. He started by thinking about how he could make the orchestra a fourth dimension, a visible, musical fabric on the stage that really becomes a part of the texture. “We’re coming at it from a Brechtian ‘everything is exposed’ kind of aesthetic,” says Staufenbiel.

I was fascinated – and to be perfectly honest, a bit nervous – when I walked into the Ordway and saw the orchestra chairs and stands center stage, with the back half of the split pit sunken down and a single bridge suspended above the orchestra, connecting stage left and stage right. Was the entire performance going to take place on a bridge that looked about three-people wide?

When I asked about this, Brian Staufenbiel’s eyes lit up. We were starting to get to the heart of his beautifully constructed artistic vision. “Here’s what they [patrons] can expect [in Das Rheingold]: they can expect a stage that is 70/75 feet deep. But guess what we have now – we have a whole extra theater in the round, inside the hall. So when I bring in the front scrim, that’s a whole other world that we’re creating there. Put up the scrim, and that’s a whole other new world. Then when we connect it all together, which we do several times, [and there’s] a third world. So what’s really exciting about this [is that] we’re utilizing space to create our sets while having the orchestra on the stage. By being able to bring the pit into it, it becomes this really exciting possibility of having a theater in the round – and opera never gets to do that! When have you ever seen opera do theater in the round?” 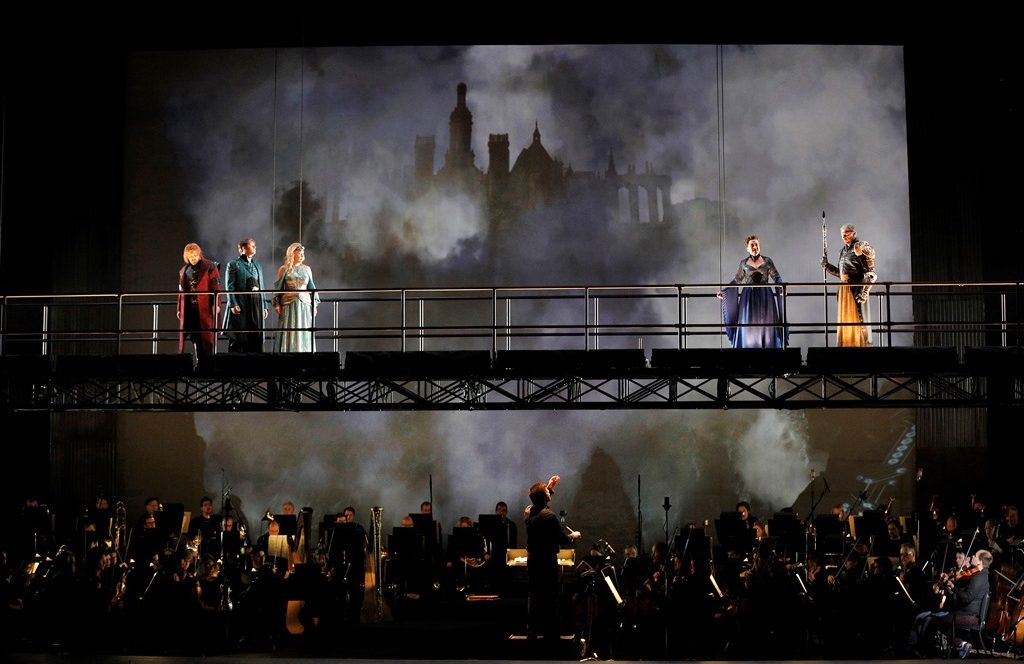 What I worried was going to be an unfortunate yet necessary handicap was in fact a masterful, innovative use of space, creating distinct yet united worlds varying in depth and purpose. I have never seen opera like this, but I sure do hope to see more!

“I was trying to find an angle that would help us … integrate … the technology we’re using and make sense in the story. Opera is all about storytelling and serving the music. I was trying to figure out how to make it contemporary, so I decided to set it way in the future when men have become part machine. Because Wagner’s gods are flawed and machines in the future are perfect, man-connected machines can be godlike and have flaws. The Nibelung dwarfs and the giants are all aspiring to be those gods but they’re not connected to machines – they’re organic. They [the Nibelungs] are mining old computer parts out of the ground, just like when we go back and excavate … ancient societies [we] get pottery and sometimes there are … four layers of generations. When they [the Nibelungs] bring up … metamorphic rock, they bring up rock and computer parts. That’s their version of gold. That’s what they mine to be more godlike.”

“I’ve always considered my job to stretch the boundaries while taking people with me as opposed to being shocking.” -Brian Staufenbiel

What’s convincing about Staufenbiel’s unique interpretation is that it’s true to the story yet fresh and thought-provoking. “Opera is at a crossroads,” says Staufenbiel. “We need new audiences to emerge [and] we need to embrace the current aesthetics of the current population. At the same time, the people who are paying the bulk to keep opera alive are the traditionalists. So, how do you do an opera like Das Rheingold and have everyone be happy? [It’s important to be] true to the story [and not make choices simply because] ‘that would be cool.’ You need to think of an idea that works with the story. It has been my experience that traditionalists will go with you there as long as they don’t feel beaten over the head with superfluous flair [and] forced idea[s]. If the story and music is honored [and] it’s a sincere attempt to make the story clear and serve the intentions of the composer, then they’re fine with it usually, even if it stretches them. I’ve always considered my job to stretch the boundaries while taking people with me as opposed to being shocking. [Also,] social relevance becomes really important. It’s important to gain new audiences and get older audiences to realize that opera can be more than just La bohème. It can be more than just Carmen. We don’t just need to kill the lady off in the end – we can explore other ideas.”

The Future of Opera

There’s so much morbid talk these days of the impending death of opera. One need only attend a performance to see that a single generation makes up some 90 percent of attendees, and that cohort is not getting any younger. Nonetheless, Staufenbiel is optimistic: “there’s great hope for opera, and not just because of technology – integrating technology is one aspect, but … finding ways even in a big house like this to create intimacy” are essential, and Staufenbiel and Minnesota Opera do just that.

Brian Staufenbiel and the team at Minnesota Opera are part of the opera world’s new generation of warriors, fighting to rejuvenate the art form so dear to our hearts. These fresh voices are the new interpreters our beloved operas need: artists who serve rather than shock and stretch rather than force. To Staufenbiel and Minnesota Opera I happily say “keep doing what you’re doing!”