“The story seemed to ‘sing’ from the very first pages,” says Craig Bohmler, Composer of Arizona Opera’s Riders of the Purple Sage

Few things in the opera world can compare to the excitement surrounding a world premiere, so the atmosphere at Arizona Opera is currently absolutely electrifying! Audience members will soon have the opportunity to witness history in the making: the first American Western opera. Riders of the Purple Sage, a new work by composer Craig Bohmler and librettist Steven Mark Kohn, takes to the stage this weekend. The opera is based on the novel of the same name by Zane Grey, a late 19th / early 20th century writer, dentist, and minor league baseball player. 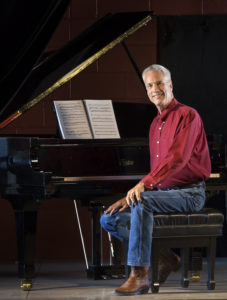 Composer Craig Bohmler was gracious enough to answer a few of our questions about the groundbreaking work.

Take us through the various stages in composing a new opera or musical. What are the most challenging and rewarding parts?

The first challenge – and possibly the most difficult – is to find a compelling story that sings. Once Riders was discovered, I made a “treatment,” which is an extended synopsis of how the piece would play. Then I had to find a librettist – in this case, my best pal of almost 40 years, Steven Mark Kohn. Working with him has certainly been one of the joys of this process. He is also a composer, so he can address the musical forms as well. Most of the libretto is crafted first and then the music is added. With Riders, we were then given two full workshops with piano where the performers could show us the piece in front of an invited audience. This was a crucial step for the writers as we could gauge audience response, take questions and then make revisions based on the consensus. Many changes were implemented during these two workshops. Arizona Opera then engaged us to finish the opera, which meant creating orchestrations for an orchestra of 55 players, casting the lead roles, and searching for a director. These parts of the process are usually two years out from the premiere.

What’s the difference between composing operas and composing musicals?

There are a few key differences. First, composing musicals is much more broadly collaborative – there are many early elements of design and a director’s input is instrumental in the work’s construction. With Riders, I used this musical theatre process, which is quite rare in opera. Casting is also a different beast – while opera singers are now expected to look the part and be skilled actors, singing is still the primary aesthetic and the crucial element. In musical theatre, actors are often chosen for their ‘look’ and acting ability, frequently need to be able to dance, and are usually enhanced with body mics to boost the singing voice so they can project over an orchestra. And, of course, the content of the forms is different – musical theatre is usually songs interspersed with dialogues and scenes, while opera is through-sung.

The story seemed to “sing” from the very first pages. It was an epic tale with two sets of lovers, strong relationships, lots of action, high emotions, and clear antagonists.

From what I understand, this commission has been a work in progress for some time. How was Zane Grey’s Riders of the Purple Sage chosen?

I encountered Riders quite accidentally. One hot July day in 2011, I went to the mountains in Payson, AZ (outside of Phoenix) for a hike. When the hike was thwarted by a rainstorm, and I saw we were near the Zane Grey Museum, I decided to check out this writer, about whom I knew very little. Curiosity piqued by the museum visit, I read Grey’s classic Riders of the Purple Sage that evening, and the story seemed to “sing” from the very first pages. It was an epic tale with two sets of lovers, strong relationships, lots of action, high emotions, and clear antagonists. I was also inspired to tell an Arizona story and create what would be the first true American Western opera, with all the hallmarks of the Western genre. 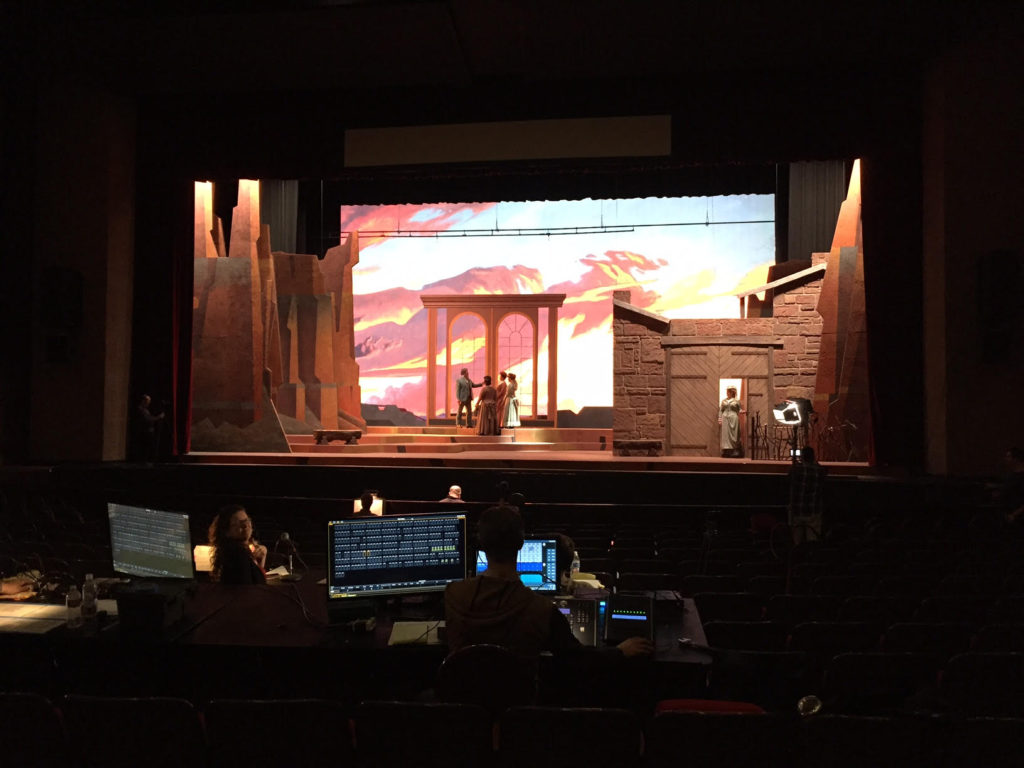 During the creative process, how closely did you work with librettist Steven Mark Kohn?

Steve is a very focused and deeply conscientious writer. On average, we spoke at least three or four times a week, though we were often on the phone daily. He was present for both workshops and always available to engage with ideas. I sent him music files for him to play through and he sent me lyrics, which I pored over. We supported each other and offered suggestions, always with the agreement that the best idea in the room would take priority.

You two have worked together on a number of projects. Are you still able to surprise and challenge each other?

I am constantly astounded by his abilities as a composer, short story writer, lyricist and now, librettist. He is a deeply articulate man of words, with a keen eye and ear for drama. Because operas are so music-driven, it has been great to have his composer sensibility come into play as well. He has contributed to a number of musical phrases in Riders, and I have been a diligent editor of his words. We laugh a lot and feel like children at play when we work

I believe this would be a great opera [for first-time operagoers]. It is in the language of our homeland, in a genre that is singularly American. Many of us grew up familiar with the Western genre, so the characters will be recognizable. 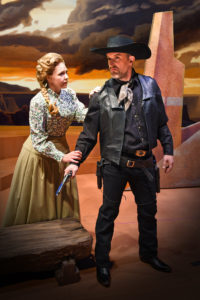 There aren’t too many operas that take place in the American West. One famous one that come to mind, however, is Puccini’s La fanciulla del West. Will audience members hear any La fanciulla in this work?

As much as I admire Puccini and particularly Fanciulla, I do not consider it an American opera for obvious reasons. Like Fanciulla, there are scenes and arias, but I mostly get my structure from musical theatre rather than from opera. In Riders, there are 12 set numbers (duets, quintets, arias, and orchestral interludes).

What kinds of sounds can audience members expect to hear? Is the music challenging to the ear?

Riders is my 15th work for the “singing stage” and I’m able to draw on that varied experience to create music that reflects the Western genre as well as the characters. I’ve used Leitmotifs (a là Wagner) to help identify characters and transform with them, and I’ve used concise structures and reprises from the musical theatre world. My mentor Carlisle Floyd told me many years ago that if an audience has a musical vocabulary of 200 words, you should give them all 200 plus 200 they don’t yet know. Keeping that in mind, I’ve orchestrated this like a Western movie might be orchestrated – to evoke vivid grand landscapes and deliver on what audiences will be expecting to hear in a Western. Riders certainly has passages of dissonance and violence, but it will be heard in a familiar context within a beloved genre, so I am confident the audience will make any musical journey with ease.

Do you think this work would be a good one for first-time operagoers? 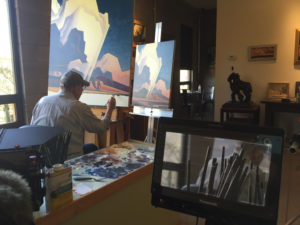 I believe this would be a great first opera. It is in the language of our homeland, in a genre that is singularly American. Many of us grew up familiar with the Western genre, so the characters will be recognizable. It will be also ravishing to look at – Ed Mell’s set design is extraordinary and anyone who has visited northern Arizona knows the colors and spirit of that landscape make it practically a character in and of itself.

What do you hope audience members will be humming to themselves when they exit the house?

I am hoping  the audience might come away humming Jane’s aria. It is stated in many ways throughout the opera, and begins and ends the work. The three iterations of the Milly Erne aria will also hook the ear with its sad and folksy simplicity. The more aggressive “Gun Song” might also be a takeaway.

Tell us about one scene or aria in the work that you feel is really special, revealing, or remarkable in some way.

My personal favorite is Act II scene 4, also known as “The Graveyard Scene.” It is the place where our lone gunfighter Lassiter comes to put the search for his dead sister to rest. Against Ed Mell’s dazzling skies, Lassiter’s relationship to Jane is deepened and a discovery is made, which leads to the cliff-hanger curtain at the end of this act. It is the scene in which philosophies and raw emotions are revealed with soaring and heart-breaking music.