Last month I had the unique privilege of sitting down with Minnesota Opera’s new Assistant Conductor, Jonathan Brandani. Jonathan is a young, affable, and wonderfully delightful Italian conductor who has had a relationship with Minnesota Opera since the 2014/2015 season, when he worked with the company on Puccini’s La fanciulla del West. Last season I had the opportunity to witness his conducting of Tosca at Minnesota Opera. Even from the nosebleed section I could feel his passion and witness his masterful command of Puccini. 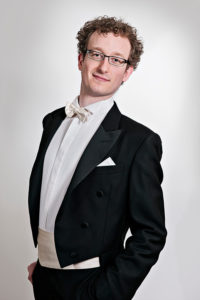 You grew up in a culture that reveres opera and a place where the art form is widespread. But that’s not really the case in Minnesota. How does that feel?

I don’t want to contradict you, but… Of course, music and art have a special place in Italian history, but now I’m concerned that it’s more a part of the past. In the present, it’s not as fruitful. There has been a bit of a recession as far as culture is concerned because of the lack of money – there was a big recession in 2007 and 2008 that affected opera houses everywhere. I remember my grandpa used to whistle or sing tunes tunes from opera everyday and I didn’t even know that that was opera, but I grew up knowing those melodies. But today you don’t find that anymore. You have to bring newer generations to the opera. Here [in Minnesota], however, when I first got in touch with this company, I was surprised to hear that the new operas, the new commissions, are sold out every time! People are in line to see new operas! And there are so many young people in the audience. I was happily surprised. Minnesota is for culture, and Minnesota is for art. I ended up here, and I think I’m lucky to be in a state where people do care for arts, where people do care for music and education. The people love music; there are so many choirs here – it’s the land of 10,000 choirs! I’m new to the States, but I can’t think of a place where people love music that much. I feel like people are really engaged. Subscribers and donors really love opera and are enthusiastic here. This is something we are kind of losing in Italy.

Here you have the courage to experiment, you have the courage to try something. I like that in America, the United States it trying to find its own voice in opera. Opera was born in Italy four and something centuries ago and we kind of developed this art form. We found many ways to engage with the audience and the public. And then the art form spread to France, and Germany, and Spain, and then everywhere in the world. But when it came here, I understand that people really wanted to make opera something of their own, and now this century, you see a huge number of contemporary American operas; there is a blossoming of new works, and that’s amazing because you see this country and this culture trying to find its own voice in opera and that’s so exciting. In Europe we don’t dare to experiment with new operas.

Everybody in opera is so enthusiastic and passionate about this profession. That’s something that I really care for. You do this profession because you love it. It’s great to be in the room sharing this passion with so many people, whether they’re stage managers, costume designers, pianists, singers, orchestra players. We all share this big passion, and you can feel that. When everyone gives 100 percent, the magic happens!

Tell me a little bit more about what your role as Assistant Conductor entails.

I have my own production – next year I’ll be doing Don Pasquale – so I’ll be music director, I’ll be the conductor, and I’ll be responsible for that whole production. Then as Assistant Conductor, I need to be in the room when we rehearse from the first minute to the last. I have to be the cover conductor of every show. I am assistant to our guest conductors and our Music Director, Michael Christie, which means that they may ask me for help to run some rehearsals for them, or to work with specific singers, or to work with the young artists, or to coach people to get them to where they need to be, or to work with the orchestra to prepare parts or correct mistakes. Sometimes they ask me to coach – my background is as an opera pianist, so often they ask me to spend some time with the ensemble or singers to explain or conduct or work on style, tempo problems, or diction, or whatever might be necessary. So, it’s a very flexible position. I love collaborating with other conductors; it’s very mutual – you have to trust them, they have to trust you. When you give them notes, they have to trust that what you tell them is right and they do not investigate or question, so it requires a lot of loyalty and trust. Michael Christie is just phenomenal, and he is a great mentor. I’m very proud to be his assistant.

How do you study conducting?

You know, it’s hard. There are many opinions out there, and many people think there is no way you can study conducting. I can see the truth in that, but on the other hand, there are a set of technical skills that you can learn, that you can teach. So in my training, I started out as a pianist, graduating in piano, and then I studied musicology at a university in Italy, and then I was asked to conduct a non-professional chorus in my hometown, and I didn’t know how to start so I had to take conducting lessons. While doing that I realized that I love being a conductor because it involves so many skills; you have to master the conducting patterns, which tell the orchestra how fast, how slow, how to speed up, how to slow down, when to start, when to stop because when you are leading the orchestra, you cannot talk. You also have to be expressive and express your musicality. You need to tell them what kind of passion to bring to the score and everything has to come through your hands and your body, your eyes, your face – there is a lot of non-verbal communication involved.

The biggest part of this profession is the preparation – something that nobody sees here [in the opera house]. People come here and they see the tip of the iceberg, but every conductor spends weeks or months going through the whole score – you have to know every single line, every single instrument, every word…

Do you really know every word in every opera you conduct?

I’m very grateful to my first teacher who told me, “Don’t ever dare to conduct an opera if you don’t know every single word in the show.” And that’s what I do. If you don’t know that words, there’s no way you can make good music. It’s hard and it’s different from symphonic conducting because we have this extra layer of challenge.

You don’t start with the idea that you will memorize everything, but after a couple weeks of rehearsals, you end up memorizing everything. We work so many hours with the opera that you cannot help but learn the whole thing; you can’t help it. When you’re conducting, you have to know the text; you can’t just follow the score. You have to know the text and the music so well in order to be flexible.

So I studied conducting in Vienna. Part of the work is that you need to be fully aware of the styles; opera is a very old art form – there are four centuries of repertoire and so many languages – there is Baroque opera, late Baroque, early Romantic, Bel canto, verismo, Verdi, early 20th century. There are so many styles and the conductor has to know everything: style, interpretations, traditions. Most of the work happens before the first day of rehearsals. 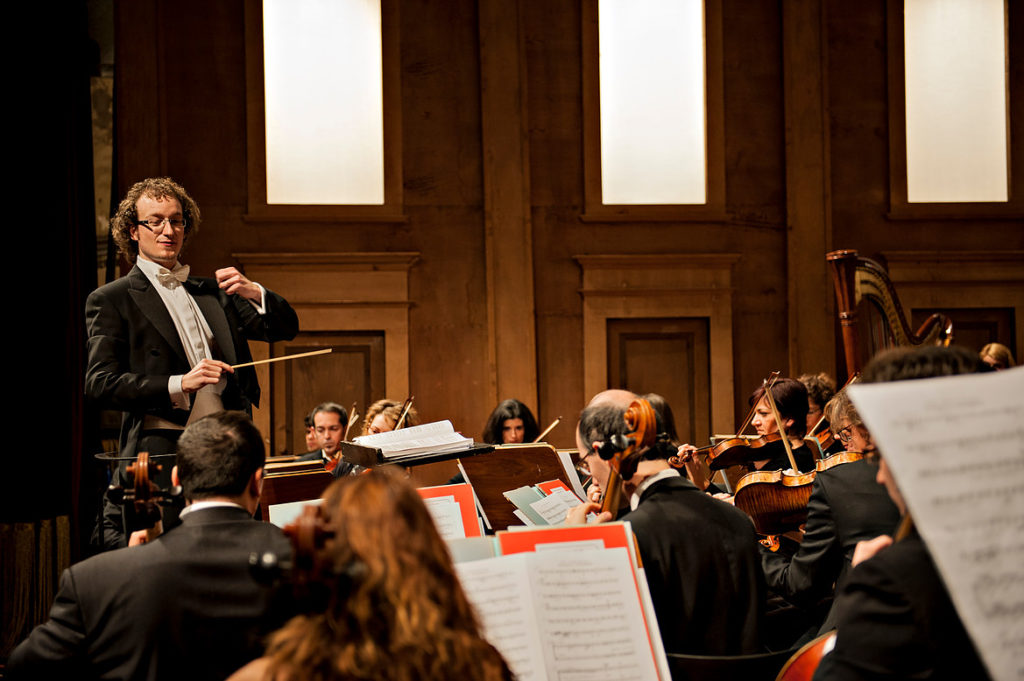 Have you ever conducted without a score?

I do sometimes, mostly in the symphonic repertoire. I find it’s more common there. With opera, I usually memorize everything, but it’s good to have the score in front of you because there are so many things that can happen – a piece of scenery doesn’t move and we have to stop, you have to know the rehearsal number so you can say, “Let’s start from here.” But usually I don’t look at my score very much when I’m conducting.

Ideally I would do a variety of things, though every conductor should know his own strengths and weaknesses. And of course every conductors has his own preferences, so he may wish for something to happen more often than something else. On the other side, it’s the industry that decides what you are going to conduct. I recently talked to a conductor who has had a long career and is close to retiring who said, “You know, I almost never decided what I was going to conduct; it was the opera houses that would call me and say, ‘We would like you to do this.’” What would you answer? You answer, “Yes.” I think you can drive your career in a specific direction, but most of your reputation as a conductor is made by the work that you have done, so if people think you’re really great at something you don’t enjoy doing, it’s hard to say, “No.” So I think it’s a mix of what you want to do and also what the business wants you to do.

I feel very comfortable in Italian opera; I have a feeling for the phrasing, for the structure of the music, for the flow, for the singing quality, but I equally love German opera; Mozart is a great love of mine. I also love Baroque music.

My favorite opera is the opera I’m about to conduct every time. That being said, I have my preferences, of course. I’m very excited to conduct bohème in a few weeks. My favorite opera, or one I really enjoy listening to, would be La fanciulla del West [Puccini, 1910], which is actually the first opera I worked on with this company [Minnesota Opera] three years ago, so it has a very special place in my heart. I know it’s not one of the standard famous operas, so I’m sorry if it’s disappointing, but it’s a great work of art; Puccini really mastered balance, and the orchestration is so great, and the drama is paced so carefully and the music is so powerful. I remember the first day I heard that opera – it was actually on a DVD – I couldn’t believe what I was experiencing. That music was so different from everything else I had experienced. It was so far beyond my expectations. Since then, every time I listen to that opera, it all comes back. It’s a powerful story of redemption through love.