Leah Crocetto, San Francisco Opera’s latest Aida, is no longer an up and coming star – she has made it! Crocetto is anything but a stereotypical diva; she is kind, down-to-earth, entertaining, and personable, one of those people everyone loves to be around. A musician through and through, Leah Crocetto got her start as a jazz singer before emerging onto the operatic stage. We are grateful that she was willing to take time out of her busy schedule to answer a few of our questions about her latest role, her career, and her dog.

We want to get to know you, so let’s play desert island: you can bring three opera recordings with you to listen to for the rest of your life. What are they?

Haha. Lord help me, I can only listen to opera for the rest of my life?! KIDDING!!! If I had to choose, it might surprise you… I would take Luciano Pavarotti’s Romantica album, the Vienna Boys Choir’s recording of Handel’s Messiah, and the Chicago Symphony recording of the Verdi Requiem with Leontyne and Luciano! Can I have one more? The Marriage of Figaro with Renée Fleming as the Countess.

When I perform in San Francisco, it’s like when the San Francisco Giants play baseball at AT&T Park.  It is my artistic HOME! My best friends are on the music staff and in the chorus, and I know the audience here. I feel as though I am sending out and getting back nothing but love!

You recently sang Donna Anna in Mozart’s Don Giovanni with Santa Fe Opera. What are the differences between a Mozart and Verdi leading lady? Which do you prefer to play?

There aren’t many differences, believe it or not. When I was an Adler fellow, I had the opportunity to coach the Verdi Requiem one-on-one with Riccardo Muti. He told me: “You have the voice for Aida, but when you sing it, you must sing it like Mozart.” He also predicted the age I would sing it! It all came true. When I sang Donna Anna this summer, I enjoyed it immensely. With Mozart and Verdi, the voice must be in line and focused. We try to make the voice like that always, but it is imperative in this repertoire. I think, so far, Aida is my favorite role. But truth be told, my favorite role is ALWAYS the one I am working on at the moment 😉

When you were in your first performance of Aida with San Francisco Opera, you were in the Young Artists Program. Tell us a bit about your time in that program. If there were one opera that you were involved in during that time that you could go back to and perform in one more time, which one would it be? 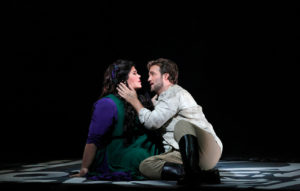 Being an Adler Fellow was the biggest gift for me.  Sheri [Greenawald, Opera Center Director] and Mark [Morash, Opera Center, Director of Musical Studies] and all their little chicks! They took great care of me and taught me about being a performer and a fully formed artist.  I also got the opportunity to perform on the main stage and cover some of the industry’s leading sopranos. A production I would LOVE to revisit is Suor Angelica by Puccini, but this time I would like to sing Suor Angelica and not Suor Dulcina!

Performing in an under-performed work or a premier carries its own challenges, but I can’t help but think that it is even more challenging (and daunting) to approach a role that has been performed successfully thousands upon thousands of times worldwide, like Aida. How do you bring something new to a role that has been sung so many times before you?

I can only bring something new to the role. I am not Leontyne Price, or Margaret Price or Martina Arroyo.  I am Leah Crocetto.  My approach to Aida is mine and all I can hope for is to create something beautiful that pulls people in. Aida has an innocence and a deep strength about her that complement each other beautifully, and are highlighted by Verdi’s incredible score.  The score is a script, essentially, and is interpreted by the artist working on the role at the time. Now, this is not to say that I didn’t think about Leontyne Price’s debut in Aida on the very stage I will be making my Aida debut on! It’s a bit daunting, but also humbling and motivating.

If you could only listen to one recording of Aida for the rest of your life, which one would it be?

I can’t choose! I love Leontyne’s for the sheer vocal prowess, I love Tebaldi’s for the language, and I love Arroyo’s for the beauty of tone.

We hear that you have a passion for jazz in addition to opera. What about jazz appeals to you so much? Has jazz helped your operatic performances?

I have a passion for music in general, I would say.  I love jazz and it is a huge part of my life. I love the old school lady crooners that sing about heartbreak and love and sadness. I love the male crooners that sing about the same. I think because of my love of this type of music, I have a freedom in my opera singing. Jazz has helped immensely with writing ornaments and performing coloratura, and also in forming my own opera language for performance.

I couldn’t help but notice the number of pictures you have with your dog on your website! What’s his or her name? How long has s/he been in your life? What does s/he think of opera? 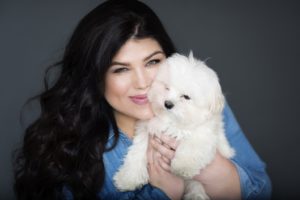 Leah Crocetto and her dog Ernie

Oh Ernie! His full name is Ernest Hemingway Crocetto.  He was named after my favorite literary figure, and it is apropos as Ernie’s first international trip was to Venice, where Hemingway spent a lot of his time! Ernie is 4 years old and has been with me since he was just a puppy at 12 weeks. He LOVES music, but hates my singing. I think it hurts his ears. He sings along and howls. It is quite cute! But, when someone is playing the piano or I am singing lightly, he will always curl up under the piano or on the chair near the piano and sleep. It soothes him.

Opera Sense is committed to helping those new to opera get familiar with the genre that we love so much. What advice would you give people who are just beginning their opera journey?

This is an excellent thing! I am so happy this is Opera Sense’s commitment! Bravi! The advice I have is this – try not to go into the performance not knowing anything about the story.  At least give it a Wikipedia/Google search! If you do this, then you don’t have to pay attention to the supertitles as much and can really get lost in the story. Don’t expect realism. When we sing it is because the emotion is so high that there isn’t the ability to speak! Opera is all sung, so the emotional level will be elevated. Just go in and enjoy the music and know that we, the performers, are giving our whole hearts to move you! We’re all in it together.