So you haven’t heard of Diana’s Garden by Vicente Martín y Soler? That’s OK; nobody else has either. Although it was immensely popular in its day, Diana’s Garden has all but vanished from the opera houses of the world since its premiere in 1787, the same year that Mozart’s Don Giovanni premiered. In fact, the work may have been performed only once on the North American continent thus far. That’s all about to change this weekend. Minnesota Opera is opening 2017 with four performances of this unsung work. Stage Director Peter Rothstein, one of Minnesota’s greatest artistic and theatrical assets, was gracious enough to sit down with us to answer a few of our questions about the work.

The librettist for this work was Lorenzo Da Ponte, the legendary librettist of three Mozart operas: Le nozze di Figaro, Don Giovanni, and Così fan tutte. Tell us a bit about the libretto. Also, you’ve mentioned “metaphorical behavior” when you’ve discussed this work. What exactly do you mean by that? 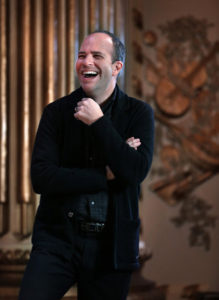 If you chart the plot of this work, there’s not a lot of action. You could probably state the synopsis in two sentences. So the trick is to capture a 21st century audience, which has a very different “visual heartbeat” from that of previous generations. Generally, our productions now are much more active. Furthermore, it’s a foreign language, so supertitles help a lot, but people are looking for a physical world to tell them the story. So “stand and sing” doesn’t get you very far.

As far as “metaphorical behavior,” well, a great contemporary playwright is already doing that. For instance, when Diana and Amore (Cupid) meet for the first time, Amore pretends to be a messenger from Amore and brings a message to Diana. I could have the two characters just sing the scene, but I wanted to give them behavior, something to do, so I had Amore bring the message on paper to Diana, who proceeds to crumple it up dismissively and throw it out. Amore goes and gets the paper and flattens it out, after which she folds it into a paper airplane. This evokes the child-like nature of Amore. Diana, meanwhile, goes to her table and starts playing solitaire by herself – solitaire is a perfect metaphor for Diana because she’s chosen to lead a chaste life. Amore, in contrast, is doing something childlike and throws the paper airplane toward Diana, thus disrupting her game. Amore then tells Diana which card to play next, which Diana finds completely irritating. Amore explains that Diana would win if she only had the queen of hearts, so Amore makes the queen of hearts appear which completely annoys Diana, and thus the game is won but it is no longer solitaire since Amore has inserted herself into the game, much to Diana’s dismay.

Is this “giving of behavior” typical of what you do as a director?

It is, but often a contemporary playwright will give you behavior. There is dramatic action, such as “a character enters, kills this person, and then people go to a funeral,” and then there is the behavior of, things like “she’s getting herself dressed for the funeral” or “she’s cleaning a gun in order to murder something.” Sometimes playwrights will give you behavior as well as dramatic action. Here in some ways I’m kind of creating both of them because there’s not a lot of dramatic action, and there’s no behavior.

Does it feel a bit more personal this way? Do you feel more connected to the work since you’re putting so much of your own thought into it?

Yes. Probably, yes. In some ways it’s probably closer to Shakespeare than it is to musical theater for me. When I’m working with Shakespeare, I get brilliant dramatic action, but not necessarily behavior. With Shakespeare, the language is the action. In this libretto, there are many times when characters say things like “this is what I am going to do” and “this is what I did.” We’ve cut a lot of recitative, the reason being that we think they can actually do it instead of just telling us they are going to do it. We wanted to find a way to just do it.

I recently listened to the whole opera. There certainly is a lot of recitative in this work!

There is a lot of recit! I’d say we cut around 35 or 40 percent of the recit. And I didn’t cut any plot points or character details.

I feel that it is our jobs as performers to assume that the audience is coming in on a blank slate and consider what we’re sending them home with.

This work is very rarely performed, so it doesn’t bring with it a production history that a La bohème or Così fan tutte brings. How have you used this to your advantage?

In the opera world, in contrast, so often the singer-actors already have that visceral connection to characters; they’ve been working on their characters for months by the time of the first rehearsal. They already have a relationship with the character that I’ll never have access to. So the exchange of power that takes place in theater is not part of the dynamic in opera. As a director, I need to respect that.

For this work, what’s been great is the fact that no one has done these roles before; we’re all navigating this together. We took the first three days to sing through the scenes one at a time, after which we discussed the scene, asking ourselves, “OK, what do we know? What really just happened?” The singers were really happy that we did this. Once we decided that this is the story we’re telling, I decided that there are a few things I also wanted to make happen in order to make this a responsible story for a 21st century audience. For instance, I wanted to make it clear that Diana was in control of her own path to liberation, that it wasn’t Amore who decided it for her by sticking her with an arrow. In other words, we made tweaks to Da Ponte’s work in order to make it more dramatically compelling and authentic for a contemporary audience.

What do you think Da Ponte would have said about these tweaks?

I spent so much time in academia trying to navigate author’s intent, and the older I get, the less and less interested in it I get, to be honest! (laughs) That’s not to say I shouldn’t dig in and try to figure out what he was doing or dig in as deeply as possible in order to get to the story he’s telling, but as far as asking an audience to understand a context for something in order to make it feel responsible in the 21st century, I’m, well, not really interested in that kind of performance anymore. I feel that it is our jobs as performers to assume that the audience is coming in on a blank slate and consider what we’re sending them home with.

How does setting the work in the 1950s serve the story?

I knew “behavior” was going to be a big part of my job. I’m really interested in thinking about what it means to be a woman in the 21st century in a male-dominated world; how can a woman be powerful, maternal, and sexual in the 21st century? We looked at that really hard with Hillary. We heard so often, “Oh, she just isn’t warm or compassionate enough,” and I don’t know if we would criticize men in that same light. I mean, would we say that Donald Trump is a compassionate human being? And even myself, early on in the rehearsal process I decided that Britomarte (a female nymph) is the nymphomaniac of the group, but I didn’t call Doristo (a male character) a nymphomaniac. There are still different rules for women and sexuality than there are for men. If men go into marriage a virgin, we think there’s probably something wrong there, but if a woman goes into a marriage a virgin it’s admirable. I felt that there was something great about the 1950s because it was pre-sexual revolution, but clearly sexual revolution was brewing in this country in the minds and hearts of women and men. Furthermore, we had very clear gender roles at that time – we knew what it meant to be a mother or a father. The 1950s also gave us behavior that I felt could translate well for a contemporary audience. For instance, in one of Diana’s arias, she’s telling the men that she’s extremely powerful and can disembowel them. So in the first part of the aria, I have her making a martini. In the second part of the aria when she’s repeating herself, I have her cleaning a gun. It’s very sexual; she’s spitting on a rag and cleaning the barrel of a shotgun, and she’s plunging a stick into the barrel of the rifle and for me it’s totally funny because it’s about this sexually repressed woman, but it’s behavior that contemporary audiences can understand because they know what it’s like to shake a martini or clean a rifle. I don’t know what the behavior would have been in the 1780s, so the 1950s gave me so much more to work with. In another instance a telescope comes out, which reflects our obsession with space in the 1950s. I’m able to think about what America was doing and interested in in the 1950s and what images might mean something.

Do you think this production is going to encourage other companies to put on Diana’s Garden?

I guess it depends on what the reviewers say! (laughs).

Do you think this would be a good “first opera” for people?

I do. It’s beautiful music; it’s not challenging tonally. It’s not atonal in any way. I think it’s funny. The production is short – less than two hours of music. And love wins, and it’s romantic, so yes, I think it would be a good opera for first timers.