“Opera can do something that no other art form can do,” says Andrew Wilkowske, the Fugitive in Chicago Opera Theater’s The Invention of Morel

Chicago Opera Theater has done it again: they’ve put together a stellar cast for yet another groundbreaking world premiere. The Invention of Morel, by Stewart Copeland, former drummer for the band The Police, and Jonathan Moore, will be on stage for the first time on Saturday, February 18, 2017. Not only will audience members get to experience the excitement that surrounds a world premiere, but they will also have the rare opportunity to experience the set of the opera in a virtual reality experience prior to the show! Baritone Andrew Wilkowske, the Fugitive in the production, sat down with Opera Sense to discuss the work and his vast experience with contemporary opera.

How many world premieres have you been a part of? Are there any that stick out?

New work has been a hallmark of my career and I am fortunate to have been a part of many national and world premieres, including Silent Night (Kevin Puts/Mark Campbell), The Grapes of Wrath (Ricky Ian Gordon/Michael Korie), The Handmaid’s Tale (Paul Rouders), The Adventures of Pinocchio (Jonathan Dove/Alastair Miles) and TransAtlantic (George Antheil) at Minnesota Opera, Lucy (John Glover/Kelley Rourke) at Milwaukee Opera Theater, The Rivals (Kirke Mechem) at Skylight Opera, and The Fly (Howard Shore/Henry David Hwang) at Los Angeles Opera. I also have been heavily involved in workshopping several new operas including Doubt (Douglas Cuomo/John Patrick Shanley) and The Shining (Paul Moravec/Mark Campbell). 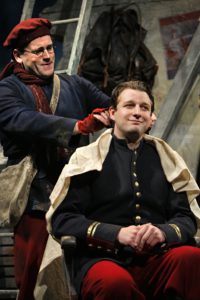 The one that sticks out the most is Silent Night. I was a part of the very first workshop and have reprised my role four times since its premiere in 2011. It won the 2012 Pulitzer Prize in music and ever since the first time we ever sang through the music it seemed like we were all a part of something very special. I have been singing it for years since, and I never tire of the music-it returns to me like an old friend every time!

With world premieres like this, there are so many exciting unknowns! What kinds of sounds await patrons?

A conventional opera told in a very unconventional way. There will be great voices and orchestral colors that operagoers are used to, but there is also spoken text, percussion, guitar, and colors that are not usually present in an opera texture.

The composer, Stewart Copeland, was the drummer for the band The Police. Do we hear any of The Police in the work?

Stewart, like all the best songwriters and composers, has a very unique and distinct voice that comes out whether it is in The Police, one of the many brilliant film scores he’s composed, or this opera. I wouldn’t say that Morel sounds like the Police, but it is a testament to Stewart’s unique musical voice that you can hear a throughline from his early rock days all the way to this opera.

What’s the first line you sing in the production? Give us a hint – what does this line reflect about your character?

My first line is “I’m here on this island forever!” This tells you all you need to know about me: where I am, my state of mind, and my prospects for the future.

Have you and the cast worked with composer Stewart Copeland and/or librettist Jonathan Moore directly during your preparation?

We have had the pleasure of working very closely with Jonathan Moore from day one in our staging rehearsals. Stewart is due to arrive soon now that we have the opera ‘on its feet’ to supervise the music rehearsals. Very exciting stuff!

This is a short opera; it’s only 90 minutes. Are the characters able to be fully developed in such a short time span?

We are thrown into a very intense storyline very quickly, and a lot of life happens to our cast in 90 minutes. Jonathan and Stewart have taken great care with the libretto and the storytelling to allow the characters to be living, breathing people. And COT cast this piece with an ensemble of wonderful singer-actors who are bringing a lot of life to their characters. I’d say the audience knows us pretty well by the end of the evening.

What’s your favorite part of this opera?

The percussion!  Also, there’s a scene where my character is composing a message to the object of his affection using flower petals. That is among the most haunting and beautiful music of the opera.

There is something so inherently dramatic about the human voice that can speak to us on our most subconscious level. It is the closest thing to real magic I have ever experienced!

Is this work a good one for first time operagoers? Or would you recommend that first timers see something like La Traviata or La bohème before sinking their teeth into contemporary opera?

I love classic operas, but I honestly believe that a contemporary opera is a terrific choice for first-time operagoers. It is usually text-driven (check), highly theatrical (check) and speaks to a modern musical sensibility (check again). 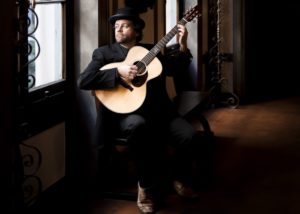 Andrew Wilkowske in On Site Opera’s The Barber of Seville. Photo by Fay Fox.

Classic operas can sometimes alienate first-time operagoers who feel like they need to do ‘homework’ to understand the drama or even the music. Contemporary opera usually has modern musical and dramatic idioms and speaks to a 2017 audience with immediacy. That’s why I love new work. It has the ability to communicate to an audience with no pretense.

Ticket holders have the rare opportunity to experience a pre-opera virtual reality of the island on which the opera takes place! Have you had a chance to experience this VR? What was it like? Is there any music involved in the VR? How will it help audience members get acquainted with the work?

I have been told about the VR experience but haven’t been able to see it yet. It sounds like a great way to immerse yourself into the world of the opera. And in an opera about technology and invention, what better introduction than a Virtual Reality tour?

Opera can do something that no other art form can do. It can take a moment out of time and elevate it into an idea that is greater than any text or any musical motif. There is something so inherently dramatic about the human voice that can speak to us on our most subconscious level. It is the closest thing to real magic I have ever experienced!