Many operagoers see the maestro down in the orchestra pit conducting the work and taking a bow at the end of a production, but most don’t know what goes into preparation for a production. Could you explain the different stages you’re involved in during the production of an opera?

As Music Director of Minnesota Opera, I’m involved with a great deal beyond the performances our patrons enjoy. Planning for our seasons is an ongoing company-wide process that involves a great deal of research about different production teams and concepts as well as the extraordinary wealth of musical talent we have to choose from. Once we have set the titles and teams, I enjoy being involved in early discussions with the stage directors in their conceptualization of the work so that I can plan for how the music will support that vision and vice versa. When everyone arrives to begin rehearsals four weeks before we open, I am in the rehearsal room with the cast and director shaping the scenes dramatically and musically. I particularly enjoy working with directors who have a robust viewpoint of the characters they are developing both through the words and the musical gestures composers and librettists use to tell the story.

You just conducted Gounod’s Roméo et Juliette at Minnesota Opera a few weeks ago. How can you switch to something so drastically different so quickly? Did Das Rheingold rehearsals overlap those of Roméo? 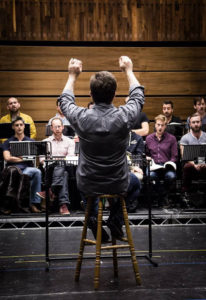 I have a pretty long list of projects that are in constant development. I started learning Rheingold over a year ago, all the while working on Romeo and other future projects. It’s great to have scores at various stages of development because you can spend time digging deep into the material and instructions composers give us for their respective works. Also, I find that every opera seems to inform performances of others, especially when composers such as Gounod and Wagner are writing at the same time in history.

This production places the orchestra on the stage rather than in its normal location in the pit. Wagner’s works also call for rather large orchestras. How have you ensured that singers will not be overpowered by the orchestra?

It’s important to note that even if we wanted the orchestra in the pit, we couldn’t do it for this opera. The Ordway pit holds no more than 60 players and that’s with Crisco and a shoehorn! We’ll have 80 instrumentalists on stage, so we needed to be very creative with how we present this opera. No singer will ever be behind the orchestra in this production so I’m not anticipating major balance issues. Director Brian Staufenbiel and I are in constant dialogue about staging options should we find unplanned acoustic problems.

Having read Brian Staufenbiel’s (the stage director) notes for this production, I am fascinated and excited by the idea of bringing elements of our modern era (such as semiconductors and computers) into a masterpiece like Das Rheingold. That said, some operagoers believe that straying from the composer’s conception of a work is a disservice to the composer and audience alike. What’s your take on this? 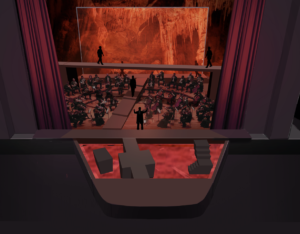 Brian’s concept perfectly confronts the questions Wagner addresses in Rheingold, the main one being the origin of power. Any good production of Rheingold is going to illuminate how the “gold” infuses energy to its holder exactly as our electronically connected world does to us today. Most human beings on Earth at the moment are substantially dependent on our energy production and distribution grid, just like the Nibelungs are subservient to the veins of gold they mine in Wagner’s original concept. I think the use of video projection as the backbone of the visual experience patrons will have is a powerful signal to what human-kind’s next “gold” might be!

Most human beings on Earth at the moment are substantially dependent on our energy production and distribution grid, just like the Nibelungs are subservient to the veins of gold they mine in Wagner’s original concept.

What would you say to people who believe that Wagner is bombastic, over-the-top, and unapproachable, a sentiment I have heard expressed on countless occasions?

I would say they don’t know Wagner! He is a masterful storyteller. Maybe people could get hung up on the length of his operas, but honestly, if done well, the audience should be transported to another time and place and not be fully aware of the passage of time.

Wagner once said that the secret to his musical form is the art of transition. What should audience members listen for and expect during scene changes? 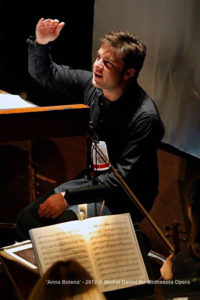 Wagner gives us so many musical signals through the opera that I’m imagining transitions will be a fairly easy experience for audiences to keep track of. He exploits certain motives associated with characters before and after transitions moving the audience into a new time and place. I would enjoy the musical development of the scene we are leaving and be open to the insertion of the new motives as a signal that we are moving on.

For those interested in the Ring but new to opera, what advice would you give as far as how to approach and enjoy it?

First of all, don’t drink too much of caffeinated/diuretic drinks beforehand! Ushers will let people in and out as the performances happen but you don’t want to miss anything – there is no intermission for this two and a half hour production. I’d take a look at the synopsis for each scene. It’s pretty clear what’s happening, but if you’re seeing it for the first time, I’d want to know who is in the family of the Gods, the Nibelungs, etc. Most importantly, this is enormously muscular and thrilling music. For the performers onstage, Wagner’s operas are pretty much the Olympics of the opera world and you’ll be amazed at the amount of sound a human voice can create!

For the performers onstage, Wagner’s operas are pretty much the Olympics of the opera world and you’ll be amazed at the amount of sound a human voice can create!

If an audience member walked away from Minnesota Opera’s production of Das Rheingold humming three of the work’s leitmotifs, which ones should they be and why?

I think the accented “Rheingold” motive joyously introduced by the Rheinmaidens will stick with people. Second would be the epic Valhalla theme at the beginning of the second scene that is also heard in a slightly different form at the very end of the opera. The third isn’t as relatively important a motive but it’s so heroic, it’s hard to forget – Donner’s “Heda, Hedo” (pronounced “Hay-dah, Hay-Doe”) motive comes as he’s clearing up the clouds to reveal the rainbow bridge near the end.

Is Minnesota Opera preparing for a full Ring cycle? Can operagoers look forward to attending Die Walküre, the subsequent opera in the tetralogy, next season?

Presenting the Ring Cycle is certainly an aspirational and artistically inspiring prospect. The financial considerations are immense and require further support and commitments from the community to pursue this endeavor. We hope that through our innovative and resourceful efforts on this production, we create an interest and backing from our community to explore future presentations of the Cycle in a viable manner.

Wonderful interview! Thank you Trevor for the interesting questions, and thank you maestro for the insightful answers. Already looking forward to seeing it!