With Lyric Opera of Chicago’s opening of Donizetti’s Lucia di Lammermoor, a prime example of the Italian style known as bel canto, this weekend, I thought now would be a good time for a little refresher. So, what exactly is bel canto?

“Opera buffs today use the term bel canto all the time. Yet we each seem to bring a different set of assumptions to the concept.” -Anthony Tommasini, New York Times

Bel canto literally translates to “beautiful singing,” and it was a popular singing style in Italian opera from the mid-18th to early 19th centuries. The three kings of bel canto – Rossini, Donizetti, and Bellini – all reigned supreme in the early 19th century, but bel canto as an approach to singing actually started before them. Nonetheless, when operagoers talk about bel canto, they are often referring to the works of those three Italian composers. You may have noticed that we seem to be talking about bel canto in two distinct ways. The reason for this is that there are in fact two primary uses of the term bel canto: 1. as a singing technique, and 2. as an operatic sub-genre.

Bel canto as a style 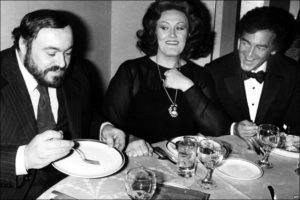 Despite the fact that the term has been thrown around rather loosely, it is possible to pinpoint a few characteristics of bel canto as a singing style. As the name implies, the focus of bel canto is on the music, especially the voice. “Beauty” is the key word when it comes to bel canto. There is plenty of room for rubato (the freedom to slow down and speed up) in this style, and lead characters often have cadenzas (short passages for the solo voice in an improvised-like style) which allows them to showcase their voices. When you listen to different recordings of different interpreters of the great bel canto roles (e.g. Lucia in Donizetti’s Lucia di Lammermoor, Norma in Bellini’s Norma), you’ll notice the distinctive coloring, ornamentation, and embellishment that the singers incorporate into their interpretation of the role. In bel canto, more so than in other styles, the different sounds a singer brings to the character play a greater role in the development of that character. “Subtlety” and “nuance” are two words that come to mind when I think about bel canto.

Other characteristics of bel canto as a style:

“While, as a style, it [bel canto] is full of sublime beauty, it is also remarkably straightforward. Characters say what they feel and speak of what they want.” -Fred Plotkin, Opera 101

Bel canto as a genre

There are also identifiable features of bel canto when the term is used as an operatic sub-genre. In bel canto works, much of the drama is expressed only in their gorgeous, supple, mouth-watering arias. The orchestra is often little more than a beautiful accompaniment to one of the greatest instruments of all: the human voice. The stories in these operas are often relatively simple and easy to follow. There are both great tragic and comic bel canto operas, and they are made up of traditional Italian operatic forms, such as “double arias” consisting of a cavatina and caballeta, and the scena. These operas also often had mad scenes. Additionally, none of the great bel canto composers used their art to challenge societal conventions. As Fred Plotkin puts it,

“The characters in [bel canto] are the opposite of the ideological surrogates of Verdi and Wagner. In [bel canto], the sociohistorical conditions and attitudes that produced the characters are a constant that go unquestioned and unchallenged; they function simply as a context in which the characters exist.”

Having discussed the two distinct uses of the term bel canto, I think we’re ready for an example. Listen for some of the characteristics mentioned above in this excerpt from Bellini’s I puritani. You will hear Luciano Pavarotti and Joan Sutherland, two extraordinary singers well-versed in bel canto, in this recording of “A te, o cara”.

Did you hear the portamento, rubato, and ornamentation? What about the prominence of the voice over the orchestra? If you missed any of these, go ahead and listen to it again. With music this gorgeous, it’s easy to get lost in the sheer beauty of it all. This brings up an important point about bel canto – don’t let yourself get swept up in the sounds so much so that you stop following the story!

“Diva worship” is also deeply associated with bel canto as a sub-genre. While there are rich roles for all types of voices in the repertory, the soprano voice of the leading lady is almost always the most important, so much so that many operagoers believe that a bel canto work shouldn’t be attempted without a particularly strong soprano. Past leading exponents of bel canto include Maria Callas, Joan Sutherland, Montserrat Caballé, June Anderson, and my personal favorite, Edita Gruberová, whose Lucia floors me every time I listen to it. A couple of today’s excellent interpreters are Diana Damrau and Natalie Dessay.

Here is a quick list of some of the great bel canto operas:

[…] I’ve heard a lot of naysayers talk about Olga Peretyatko’s diction and intonation, but just listen to her in this recording of Bellini’s I puritani. What a gorgeous sound in such an exquisite work, an excellent example of bel canto. […]

[…] is a coloratura soprano. She is a renowned interpreter of many leading ladies in the bel canto genre, as well as the Queen of the Night (Mozart, Die Zauberflöte or The Magic Flute), one of the […]

[…] the best-known operas by Bellini. Vincenzo Bellini is considered one of the big three composers of bel canto opera. I’ve seen several operas by the other two – Rossini and Donizetti – as well as a lot […]